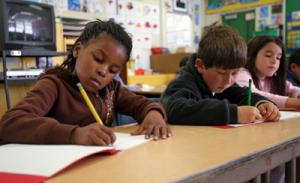 On Thursday, the California Department of Education released the results of its Academic Performance Index, which tests second- through 11th-grade students each spring in math, English, science and social studies.
The San Francisco Unified School District improved its 2009 performance by 16 points, and now is just nine points below the state’s goal of 800 out of 1,000 points on math and English tests. Similar improvement in next year’s results would put SFUSD into compliance with state goals.
Read more at the San Francisco Examiner: http://www.sfexaminer.com/local/2011/05/good-news-bad-news-test-results-san-francisco-schools#ixzz1LcnwJkaM
Media coverage