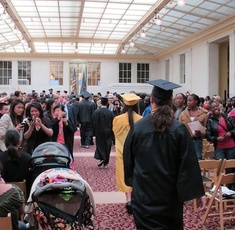 On Monday, with graduation season in full swing, 18-year-old Olivier Grandvoinet put on a cap and gown and gave a speech on behalf of his class in front of 250 people at San Francisco’s City Hall. He thanked his family, his teachers, his principal — and his probation officer.

Grandvoinet, who said he used to be on probation for fighting to protect a girl he knew, is one of more than 50 students graduating from San Francisco court and continuation schools this year. The programs cater to youth who have failed out of traditional schools or been ordered by a court to attend classes in non-mainstream settings.

“It’s one of those quiet successes, but clearly it’s indicative of the success of kids who have struggled in a traditional school environment prior to their involvement with the system,” said Allen Nance, assistant chief of juvenile probation in San Francisco.

For the students, the road to graduation has been tough, and success was anything but certain. Some got in trouble because they were bored in their classes. Others got involved with drugs or gangs, and many completed their high school degrees while they were incarcerated.

Rodolfo, an 18-year-old from the Mission District, has spent nearly two years in the juvenile justice system: 15 months at juvenile hall and seven at Log Cabin Ranch, San Francisco’s South Bay youth camp for young people who have committed serious offenses. Nance requested that only Rodolfo’s first name be used. As Rodolfo lined up Monday to walk onto the stage, he said he would rather talk about his future than his past.
“I got caught up just doing bad things,” he said, adding that he plans to join the San Francisco Conservation Corps when he leaves the ranch in five months. “This is the first thing I’ve ever been proud of in my life. It’s the first productive thing I’ve ever done.”
Nance, who spends much of his time overseeing Log Cabin Ranch, said his team has been partnering with the San Francisco Conservation Corps and other groups that teach teenagers life skills through experiential learning. The ranch program includes academics, computer training and sports, as well as vocational skills like horticulture, carpentry and, soon, forklift driving.

“These kids have built a fence around the orchard, complete with a gate,” he said. “They’re now working on the landscape design project and redesigning the picnic area.”

Jim Fithian — the principal of the Principals’ Center Collaborative, a school whose 40 students attend classes there by court order — turned away from the audience during Monday’s ceremony and addressed the students directly.

“You may have saved a life today,” he told the students. “You’ve certainly changed your communities.”
Half an hour before Monday’s ceremony, on a balcony overlooking the City Hall rotunda, Mayor Ed Lee honored Fithian with the Principal of the Year Award. In his remarks, Fithian recalled how he started teaching kids in the juvenile justice system by accident almost 20 years ago. He thought he was just signing up for a special education position.

“It turned out to be juvenile hall,” he said. “I didn’t know that until I got there.”
Fithian recently announced that he is leaving his post as principal of PCC to become a teacher at Log Cabin Ranch. The move comes with a 30-percent pay cut.

“I told the staff, ‘That’s how much I want to go down there,’” he said.
Grandvoinet, the student who spoke at Monday’s graduation ceremony, wants to be a teacher, too. He just completed his first semester at City College of San Francisco, where he is studying child development.

“I want to teach eighth-grade English,” he said. “In ninth grade, they start thinking they’re cooler than the teacher. That’s what happened to me.”
Media coverage