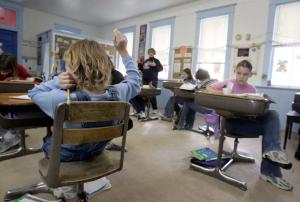 Fifth graders entering the sixth grade in the 2017-18 school year will automatically be assigned a school based on their enrollment at the elementary level following approval of a plan by the San Francisco Unified School District’s Board of Education.

The school district has been working for the past two years to create a system -- known as middle school feeder patterns -- that will allow parents to know which school their children will go to based on where the child is enrolled for kindergarten.

A plan to implement the feeder patterns was approved by the school board Tuesday evening.
The way middle schools are assigned, however, will not change until the 2017-18 school year. In the meantime, parents will still have complete choice in their middle school. However if a school has too many students applying for a limited number of spots, those students attending an elementary school that will eventually feed into the middle school would get preference over other students.
By the 2017-18 school year, fifth-grade students will automatically be placed into a particular middle school without the need to apply.

Superintendent Carlos Garcia said he understands that not all families will support the system, but hopes they will understand this is one way the district is trying to address the quality of all programs at all middle schools.
“The system itself isn’t what’s going to create quality middle schools,” he said. “But we need to align schools in order to support that goal.”