S.F. schools' technology finally gets up to speed 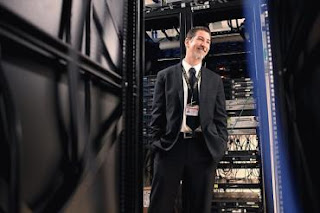 When Erik Heinrich left the Pacific Stock Exchange three years ago to take a job overseeing technology in the San Francisco school district, he thought people were joking when they described Internet capability in city classrooms.

At the time, at high schools with 2,000 students, one student at one computer watching an educational YouTube video consumed a third of the school's bandwidth.

Most days the system simply stalled, unable to process the demand for online access.
Coming from a private industry that calculated to the millisecond every dollar lost during a computer failure, Heinrich was dumbfounded.

"It was not something I could comprehend," Heinrich said, noting the Silicon Valley companies a stone's throw away. YouTube headquarters was less than 10 miles from several San Francisco schools. "It was impossible to me."

It took two years of planning and one year of work to install the fiber cables to push the district into the 21st century. But as of May 20, each of San Francisco's 120 schools has 600 to 800 times the bandwidth it did last summer, Heinrich said.

Note to city property tax payers: This is where a bunch of your money went.
Each year since 2008, San Francisco property owners have ponied up $198 for Proposition A, a measure that largely helps recruit and retain teachers with higher salaries.

But in the small print, the ballot measure also noted the money would help upgrade district technology.