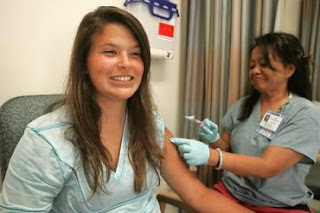 School districts across the state are struggling to comply with a new law requiring all middle and high school students to get a whooping cough booster shot before showing up for class this fall.

With the school year starting as early as mid-August, more than 1 million California students still haven't gotten the vaccine for whooping cough, also called pertussis. That's about a third of all seventh through 12th graders.

Students who can't produce proof that they've had the vaccine by the first day of school will be barred from class until they get it. The Legislature approved a measure this month to extend the deadline by 30 days, but Gov. Jerry Brown hasn't yet signed it. He has until Tuesday to sign or veto it, or the extension will automatically go into effect.

The new vaccine law was passed in September in reaction to a nationwide spike in whooping cough cases last year. The law applies to both public and private school students in an age group that is most likely to spread a disease that is a racking illness for adults and a deadly disease for infants.