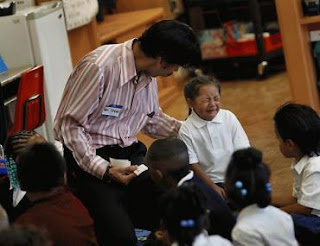 SAN FRANCISCO -- A year ago, Christopher Rosenberg was given his marching orders: fix John Muir Elementary, one of California's worst schools
.
He would have three years and about $5 million in federal funding to complete the job. Eight other failing schools in the San Francisco Unified School District were operating under the same parameters, but Muir, a kindergarten through fifth-grade school in the city's Western Addition, was Rosenberg's.

He turned a laser-like focus on literacy. Science, social studies and even arithmetic took a backseat.

If you can't read, you can't learn those other things, Rosenberg argued. Boost students' reading and writing levels, and those other subjects would become easier to learn.

So, Rosenberg hired extra literacy coaches for teachers and tutors for children. He also brought in new staff to help increase parent participation, based on evidence that increased support for education at home leads to better attendance rates and fewer disciplinary problems at school.

Fast-forward 12 months. While Hollywood isn't calling yet to make a movie about a miraculous school turnaround, Muir is on the right track.

Standardized test scores out Monday showed a double-digit jump in language arts test scores among its students. Nearly 40 percent of students were proficient in the subject, up 13 percentage points from the previous year.

"I think we did what we said we were going to do, and that feels pretty good," Rosenberg said. "It feels like if we work really hard, we could do this again."

Math scores dipped a couple of points to a 34 percent proficiency rate, but that was a small dent in the 11 percentage point increase made the prior year.

While disappointed, Rosenberg was unapologetic.

"I'm very comfortable to focus on the reading first," he said. "You kind of have to start with that."