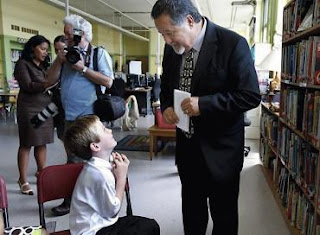 Nearly 1 out of every 5 students in California's projected class of 2010 - 18.2 percent - dropped out of high school before graduation day, meaning 94,000 teenagers hit the streets without diplomas, according to data released Thursday.
Perhaps more alarming are the 17,000 eighth-grade students who quit before attending a single day of high school, about 3 percent of their class.
These numbers are believed to be California's first accurate assessment of the dropout and graduation rates using a data system that tracks individual students over their four-year high school career, according to the state Department of Education.

Overall, 74 percent of high school students graduated on time. The remaining 7 percent who didn't graduate or drop out were students still enrolled in school or who earned a general equivalency diploma.
In past years, the state used an unreliable system that relied on schools to manually track students and report dropout rates. The data were sketchy at best, with rates fluctuating year to year and among districts with similar demographics.

Over the past decade, reported dropout rates statewide have fluctuated between 11 and 22 percent.
"For far too long, the discussion about graduation and dropout rates has revolved around how the results were obtained," state Superintendent of Public Instruction Tom Torlakson said in a statement. "Now, we can focus on the much more important issue of how to raise the number of graduates and lower the number of dropouts."

In Oakland, it's a significant issue.

For African American, Filipino and Hispanic students in the district, the numbers were worse, with fewer than half graduating.

"We've been tracking these numbers, and as discouraging as they are, they are not surprising," Flint said. "It just underscores the amount of work we have to do."

Flint said the district's reform efforts over the past decade have focused on elementary school students. Class sizes were reduced, and literacy support programs were introduced. The strategy neglected high school students, he said.

The district's new strategic plan puts greater support structures in place for its older students, he said.
Across the bay in San Francisco, schools fared much better, posting an 82 percent graduation rate and an 11 percent dropout rate. Racial disparities were still prevalent, with about 19 percent of Hispanic and African American students dropping out, compared with 6 percent of Asian students and 10 percent of white students.

District officials cited a citywide effort to combat truancy and absenteeism as a successful tool in lowering dropout rates.

The city has singled out students who have missed more than 20 days of school in any given year. Studies show those students are at a much greater risk of dropping out later.

On Thursday, city officials announced significant improvement in attendance rates, with a 16 percent reduction in those who were chronically absent.

"As someone who dropped out of high school, I know firsthand how important it is to intervene early when it comes to truancy," San Francisco District Attorney George Gascón said in a statement. He later earned a general equivalency diploma, then a bachelor's degree in history from Cal State Long Beach and a law degree from Western State University in Fullerton (Orange County).

"One of the best investments we can make as a city is working collectively and collaboratively to motivate students and parents to make education a top priority," Gascón said.

Note: Not included are the remaining percentages of students still enrolled in school, those who received a general equivalency diploma, or those who were non-graduating special-education students.
Source: California Department of Education
Read more: http://www.sfgate.com/cgi-bin/article.cgi?f=/c/a/2011/08/11/BAT71KMA37.DTL#ixzz1V74mlmBg
Media coverage