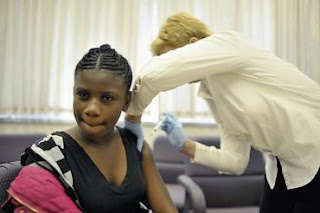 San Francisco -- Some 2,000 San Francisco students who still lacked proof of a whooping cough vaccination one month into the school year were barred from class Thursday and told not to return until they got the shot.

A new state law requires all children in grades seven through 12 to have the vaccine by the first day of school this year, but districts struggling to get families to comply asked for and received a 30-day extension.

San Francisco, which had a mid-August start to school, was among the first districts in the state to enforce the new measure.

The law applies to both public and private school students in an age group that is most likely to spread a disease that is a racking three-month illness for adults and a potentially deadly disease for infants.