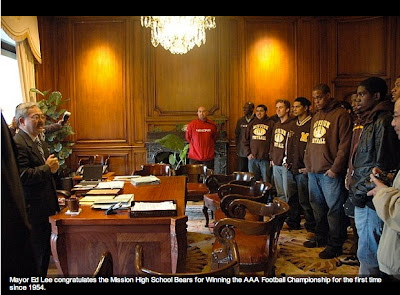 
On hand for the celebration were 49ers alumni Dwight Clark, Guy McIntyre and Dennis Brown.
It was a special occasion, notes Jared Muela, the 49ers’ youth football coordinator:
“This championship is the second enormous victory for the team this season. The first came on September 3rd, when they again were able to put a team on the field and get the 2011 season underway. Two years ago Mission High School almost had to discontinue their football program because of poor grades and participation. Coach Albano took this challenge head on and has resurrected a program most thought would fall by the wayside.”
View more photos at MissionLocal.com
Media coverage