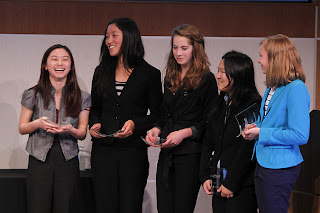 Don't be fooled by the old-school, cut-and-paste poster-board presentations that were propped up in the Intel (INTC) lobby in Santa Clara one evening this week

Once onstage, the 11 teams of high school girls unveiling their mobile apps for the 2012 Technovation Challenge were totally new-school, stunningly savvy and digitized to the max.

Competing for the chance -- worth an estimated $15,000 -- to have their app developed and brought to the Android market, 520 girls in four cities around the country teamed up with tech mentors to brainstorm ways to put smartphones to good use. Following a theme of "science education," the 100 apps were winnowed down in regional playoffs, and Thursday it was time for the cream to rise to the top.

"Our app is designed to change the way you consume, little by little, every single day," said Sonya Jendoubi, a 16-year-old junior at Lycée Francais La Perouse in San Francisco, showing off her team's Ecocitz app. By scanning grocery store products and learning instantly if the product is local, organic and comes in recycled packaging, Ecocitz "will help us fix our mistakes by focusing on people's misconceptions about what it means to be 'green.' "

One by one, the teams took the stage Thursday in front of an audience of proud parents, teachers and mentors.

Some of the mentors had worked closely with the finalists, eight ﻿of whom came from the Bay Area. And for 10 weeks, women in computer sciences, programming and even venture capital volunteered their time and expertise to help the girls build self-esteem while they fine-tuned their concepts. The point of it all is girl power, said Tara Chklovski. She's founder of Iridescent, the science education nonprofit that runs the Technovation Challenge, now in its third year and growing fast.


"A girl's perspective is different and unique from the rest of the world," she said, "and the apps they've come up with reflect that. One's called 'Simply U,' and it's designed to prevent teenage pregnancy.
"The team saw this huge concentration of pregnancies in their area and came up with an app to educate girls about their options. You never see these kinds of apps on the market because there aren't girls creating them. We're trying to change that."

The pitches came fast and furious. Each team was allotted four minutes to describe their mobile app, the problem it was designed to solve, the competition already out there, and the marketing strategy they'd use to share it with the world. "Intoxication Station" from the Mountain View High School team took underage drinking head-on, with screen icons that brought up symptoms to tell how drunk someone was, offered first-aid tips and ways to get a ride home for a tipsy teenager, even help with hangovers.

The "SATisfy" app helps students help each other study -- social networking style -- for their SATs, pairing up kids online by matching strengths and weaknesses. And "Niffler," the Monta Vista High team's learning game based on a Harry Potter character, helps kids learn their chemical compounds by maneuvering a bucket across the screen to catch the appropriate ions.

"The idea," said Anupama Cemballi, 17, team member and junior at the Cupertino school, "is to help make chemistry fun. Chemistry can be really boring in class, but our app makes it interactive."

Cembali said even if her team didn't nail first place they still planned to get their app into the Android market on their own. "And eventually," she said, "we hope to partner with tech and education companies, maybe even Sylvan Learning Centers, to get our app out there."

While some of the teams relied on the code-programming prowess of their mentors, others figured out how to develop the apps on their own, even using YouTube do-it-yourself videos on writing code. For most of the teams on hand, their initial app was clearly just the first step in a longer journey. The girls behind Niffler were already planning to add more games to help high-schoolers master their science lessons.

But it was the team behind "Froggy Cut" that seemed to be shooting the highest.

The girls at June Jordan School for Equity in San Francisco addressed a long-standing biology class problem: how to avoid cutting up all those frogs year after year, thus saving money and frogs' lives. They came up with an app that virtually dissects the slimy amphibians, allowing students to tap into the magic of digital animation to do the dirty deed right there on the smartphone's screen.

"Approximately 2.5 million frogs are dissected in high school biology classes every year," said one of the team members, pitching her heart out to the three judges. And without anyone questioning her math, she went on to posit that "with each frog costing $4, that's $10 million spent on frog dissection annually. Our app will cost each student $1.99. So we can save the schools $5 million and we can make $5 million."