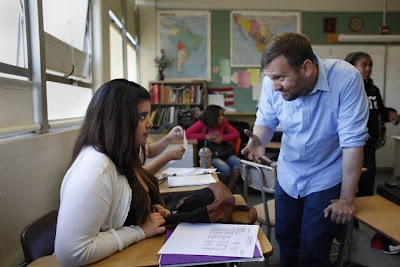 Just over 76 percent of ninth-graders who started high school in 2007 graduated four years later with the class of 2011, up 1.5 percentage points from the year before, the state Department of Education said.

In San Francisco, the graduation rate jumped to 82 percent in 2011, up five percentage points from the year before.

The new numbers, which also showed lower dropout rates, were based on a better system of tracking students and represent the most accurate picture to date of how many state students are making it through high school to graduation day, California education officials said.

The new data gave a much better picture among students least likely to graduate. The graduation rate for English learners went up 3.8 percentage points to 60.3 percent.

"It's heading in the right direction," state Superintendent of Public Instruction Tom Torlakson said Wednesday. "It's not where we want it to be."

Overall, the state dropout rate for the class of 2011 was 14.4 percent, down from nearly 17 percent in 2010. The state report noted that 9.3 percent of students in the 2011 cohort were still enrolled in school or had passed a high school equivalency exam.

The data don't include students who drop out before entering high school.

Graduation numbers were up in nearly all districts across the state, raising questions of whether the improvements were based on better accounting of kids or the result of renewed efforts to keep kids in school despite budget cuts.

Perhaps a bit of both, education officials said.

Starting with the 2009-10 school year, the state began complying with a new federal law by tracking individual students, identifying those who disappeared from schools and forcing districts to figure out where they went.

Prior to that, dropout and graduation rates were based on the overall number of ninth-graders versus the number of graduates four years later.

In San Francisco, district officials celebrated gains well above the state averages, including an 8.4 percentage-point increase among Latino students, who posted a 68 percent on-time graduation rate.

In 2010, the district launched an early-warning system to identify eighth- and ninth-graders most at risk of not graduating. The district offered extra academic and personal support to keep the students on track, Superintendent Carlos Garcia said.

Summer school is also offered to high school students behind in credits, one of the few programs still offered during the summer break.

"These numbers show that more of our students are finishing high school in four years and that most of those students who didn't graduate in four years are persisting and staying enrolled with the potential of graduating," Garcia said. "We are committed to making sure students graduate from high school."

In Oakland, rates also improved significantly but were still well below the state average. The district's graduation rate rose 4.2 percentage points to 58.9 percent and the dropout rate hit 27.7 percent, down from 33.1 percent.

"I don't think anyone is declaring victory yet," said district spokesman Troy Flint.

The East Bay district has implemented literacy programs to ensure students are reading at grade level, requiring every incoming ninth-grader to take a reading assessment, and offers special courses to build up the basic skills for those lagging behind.