In the Classroom: Burton High School's Do Now with Twitter 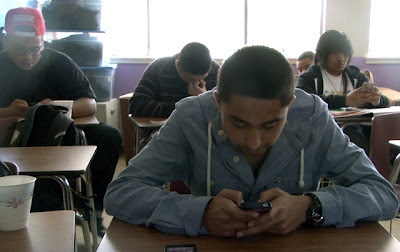 This past school year, 50 eleventh- and twelfth-graders at San Francisco’s Burton High School started tweeting in class for the first time.

Many were familiar with Twitter and some use it on a daily basis, but never for school. As in most instances, there’s a major disconnect between the role of social media in their lives outside school — where they use Twitter and Facebook to chat with friends, and update their status — and what happens at Burton. This class also demonstrates what recent studies have shown: that a large majority of kids have cell phones, even if they come from low-income families. In these two classes, 90% of students had cell phones, and 63% qualify for free or reduced lunch.

But the fact that they were tweeting in class was enough to get them excited in the project. The video below looks at the impact of KQED Do Now, a weekly activity for high school students that engages them in topical issues using Twitter, with these students and their teacher Wendy Berkelman.

“I think that using Twitter to do an assignment is maybe the coolest assignment in school,” said Jason Wong. “I like how we are able to do this through the phone and people can see our thoughts.”

Nikko Maraya piped in: “We should do it in every class.”

Beyond the novelty of tweeting, the students said they felt their voices were being heard and they created a connection to the topic. Their friends cared what they wrote and the conversation opened up to a larger community than just the class. They knew it was on the KQED site and enjoyed watching the Twitter feed update on the website.

The class assignment focused on how technology has changed how we communicate, particularly with mobile devices and social media. They talked about the value of these tools in their everyday lives and how students could use these tools in school and as citizens of the digital world.
Media coverage