Everything You've Heard About Failing Schools Is Wrong

Attendance: up. Dropout rates: plummeting. College acceptance: through the roof. My mind-blowing year inside a "low-performing" school. 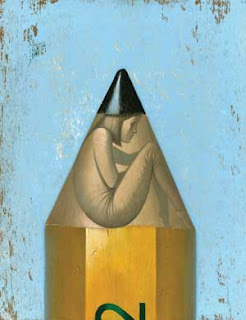 "SPEEK EENGLISH, TACO," THE GIRL with the giant backpack yelled when Maria asked where to find a bathroom. The backpack giggled as it bounced down the hall. It had been hours since Maria began looking for a bathroom. Anger boiled inside her, but she didn't know any English words to yell back. That was the hardest part. Back in El Salvador she'd always had something to say.

The bell rang. A flood of shoulders and sneakers swirled around Maria, and she couldn't see much until the sea of strangers streamed back into classrooms. Then she stood alone in the hallway.

It was Maria's first day at school, her first week in the United States. Her middle school in San Francisco was the biggest building she'd ever seen. It was bigger than the entire Best Buy store she'd walked through in awe on her first day in the city.

Eventually, Maria found her way to class, a special setting for Spanish-speaking newcomers. There she would practice English words for colors and numbers, learn how to introduce herself and how to say thank you. By eighth grade she was moved into mainstream classes, where she struggled. It didn't help that her math teacher started each class by saying, "Okay, my little dummies." He spoke really fast. Maria never raised her hand in his class.

One day Maria stopped by the administrative office, looking for someone to help her with multiplication. She took her spot in line behind a middle-aged woman who chatted with her in Spanish as they waited. Maria said school was really hard for her. The woman told her not to worry. "Latinas usually don't finish high school," she said. "They go to work or raise kids."

The woman was right, statistically speaking, and Maria's middle-school experience all but ensured she'd join the 52 percent of foreign-born Latinos who drop out of high school. She graduated from eighth grade without learning to speak English. She had a hard time writing in Spanish and didn't know how to multiply.

And then everything changed. At Mission High, the struggling school she'd chosen against the advice of her friends and relatives, Maria earned high grades in math and some days caught herself speaking English even with her Spanish-speaking teachers. By 11th grade, she wrote long papers on complex topics like desegregation and the war in Iraq. She became addicted to winning debates in class, despite her shyness and heavy accent. In her junior year, she became the go-to translator and advocate for her mother, her aunts, and for other Latino kids at school. In March, Maria and her teachers were celebrating acceptance letters to five colleges and two prestigious scholarships, including one from Dave Eggers' writing center, 826 Valencia.

But on the big state tests—the days-long multiple-choice exams that students in California take once a year—Maria scored poorly. And these standardized tests, she understood, were how her school was graded. According to the scores, Mission High is among the lowest-performing 5 percent of schools in the country, and it has consistently failed to meet the ever-rising benchmarks set by the federal No Child Left Behind Act. The law mandates universal "proficiency" in math and reading by 2014—a deadline that weighs heavily on educators around the nation, since schools that don't meet it face stiff penalties.