Lessons in inclusion at S.F. schools 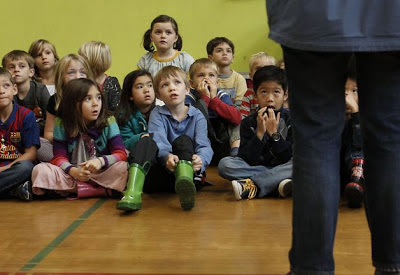 San Francisco first-grader Anabel Rubin shoved her hands into tube socks and reached for the zip-lock bag filled with a dozen tiddlywinks chips.

Her job was to move each chip individually to a plastic cup, an otherwise simple task confounded by thick cotton socks - providing a lesson in what life would be like without fingers or fine motor skills.

The challenge in the Miraloma Elementary School gym was repeated, with some variations, at schools across San Francisco as part of National Inclusive Schools Week - an effort to help children understand and support those with disabilities or differences.

"I did it!" 6-year-old Anabel said after a few minutes of furrowed-brow effort.

At another activity station, students put on goofy goggles that give the wearer fuzzy double vision - simulating what it would be like to have a visual impairment.

The students giggled as they tried to walk a straight line or catch a beanbag.

"I saw two of everything," said Anabel's classmate Richub Patel, 6. "I had to really kind of guess which to catch."

The annual week of events addresses the needs not only of special education students, but also those from different cultures, backgrounds and circumstances.

"I hope they get just a sense of how to include and recognize differences," said Miraloma parent Catherine Dauer, whose third-grade child is in the special education program. "Everybody has differences."

Other activities included a school assembly with children's author and illustrator Todd Parr, whose books address tolerance and acceptance.

The topic is especially relevant in San Francisco, where school district officials adopted a policy to reform special education by placing students with disabilities in regular classrooms with all other students. With some extra help, the kids with disabilities are expected to read, write and do the same math as everyone else.
In the past, students with special needs typically have been clustered in schools designated for specific disabilities and placed in separate classrooms for part or all of the day.

The San Francisco district has completed training at 42 schools to help teachers and staffers address the needs of disabled students. The district hopes to finish the training by 2015.

"SFUSD believes that students who need special education services are, first and foremost, general education students who need additional services and support so they can succeed in school," said Elizabeth Blanco, assistant superintendent. "Inclusive education is not a separate initiative. It is a basic characteristic for restructuring schools to improve student performance, and part of our district's bedrock principles."

Back at Miraloma, the Inclusive Schools lessons were already sinking in, Machado said.

On the playground earlier in the week, a student approached Machado to say she wanted another child to eat lunch with her, as the girl said, "she always sits alone," the principal said. "There are some really deep discussions happening."