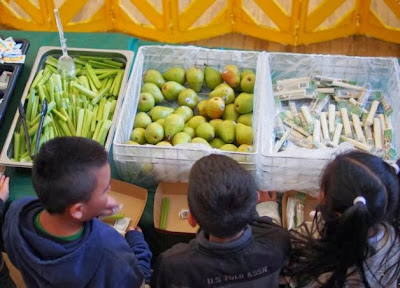 Whether you want sake in the Mission or albondigas in the Castro, this is a city that offers just about every type of food and every experience of ambience. At a price, of course. The Bay Area has the seventh-highest-ranking income disparity between rich and poor in the United States (topping the list is New Haven, Conn.), and food is one of the most poignant indicators of our division.

But a new collaboration between the design firm Ideo and the San Francisco Unified School District is trying to close that Grand Canyon-size chasm with an innovative approach to student nutrition. For the last five months, Ideo and the school district have involved 1,300 students, parents, nutrition staff members, principals, teachers, administrators and community partners in an unprecedented design process.

The first phase of the collaboration, which culminated last month, was to rethink school food in the city's public schools. Many of the 10 design ideas that have emerged could not only get kids eating healthfully, but also strengthen the relationship between the city's foodies and public school students, more than half of whom live in poverty.

It was morning rush hour on BART and people were wobbling collectively while catching up on e-mail on their smartphones. I was on my way to see the exhibit that Ideo and the school district had put together synthesizing all the learning from individual and group interviews, simulations with students, field research, number-crunching, and an endless arrangement and rearrangement of Post-it Notes (designers love Post-it Notes).

Suddenly, a pale teenage boy in a navy hoodie crumpled onto the commuters in front of him. They stood him upright via his skinny shoulders and then someone jumped up from a nearby seat so he could settle in. Within minutes, he'd confessed to not having eaten breakfast that morning, and had been given a bottle of water and a Ziploc full of snacks from perfect strangers. Turns out San Francisco does want to feed its kids well.

When I arrived at Everett Middle School, about a dozen people - cafeteria workers, students, district administrators, designers - were huddled around an exhibit set up in the school's cafeteria. Coe Leta Stafford, the design director and project lead from Ideo, was instructing the tour guides for the day on how to engage the 200 or so expected visitors - all people with a stake in the improvement of school food, including parents, school principals, Board of Education members, local food advocates, etc. "Who is it that matters most?" she asked.

The students raised their hands tentatively. "That's right!" Stafford shouted. "This is all about the students, so you guys are playing a really important role today. The best thing you can do is make it personal."

Ideo is masterful at "making it personal," as evidenced by the big, beautiful images of students and a video featuring their thoughts about what they care about: friends, their future, the food they love - everything from green tea mousse to flautas. Ideo calls it "human-centered design," and it is at the heart of all of the work the firm does - whether for multinational corporations or more unusual clients, like the 56,000 diverse students of San Francisco's public schools.

Although 43 percent of San Franciscans are white, only 12 percent of the public school students are. Twenty-four percent are Latino, 42 percent are Asian, and 10 percent are African American. Sixty-one percent of students qualify for free or reduced-price lunch (the standard is a family of four that makes $40,000 or less a year).

One of the most radical things about this collaboration has been its uncompromising focus on the students themselves - not just what's "good" for them, but what's attractive to them.
In October 2012, Ideo took one look at the initial request for proposal from the school district's Student Nutrition Services, which largely focused on labor and facilities assessments, and reframed the conversation. Sandy Speicher, an associate partner at Ideo, explains: "We had a conversation with the district leadership and said, 'What if, instead of framing it in terms of equipment and budget, we create an experience that the students choose and thrive within?' "

"Ideo helped us get out of our adult way - to shift from being systems-centered to actually being student-centered," said Orla O'Keeffe, the district's executive director of policy and operations.

Though SFUSD is the largest meal provider in the city of San Francisco - serving school lunches, breakfasts and snacks adding up to 33,000 meals every day - and though it works with well-respected holistic food vendor Revolution Foods, student participation has steadily decreased since 2009. Only 57 percent of students who qualify for free and reduced-price lunch eat it, and only 13 percent of those who don't qualify do.

This isn't just bad for the budget (which repeatedly suffers shortfalls), it's bad for students.
Research consistently shows that those who go off campus for lunch eat poorly, if at all, and that children consume 40 percent of their daily calories at school. Further, exposure to a wide range of whole foods - and a basic understanding of how food is grown, processed and sold, not to mention nutrition - are increasingly becoming cultural capital; think about all of the meetings between Silicon Valley entrepreneurs and venture capitalists that happen over foods that poor kids may not even know exist (one could write a dissertation on the class implications of the kale craze alone).

Local foodies have wanted to get involved in improving school lunches, but giving is not as simple as it sounds when it comes to the school district. SFUSD has as one of its core philosophies "access and equity"; what might sound like abstraction is actually a strong determinant of the kinds of partnerships that the district will take on. O'Keeffe explains: "Generous members of the larger San Francisco community have felt like there was no entry point. People would come to us and say, 'I'd love to donate this wonderful food.' But we actually didn't have the infrastructure to accept that kind of help while staying true to our commitment to equity."

It is usually the schools with the least economic insecurity and the most empowered parents that are offered these kinds of donations, O'Keeffe elaborates - not the ones that actually need help the most.

In order to safeguard against exacerbating inequality among the students, Ideo has helped the school district imagine district-wide infrastructure that might build those missing entry points for well-intentioned San Franciscans. Central among them is the "community portal" - an online platform that would allow local citizens to offer donations including food, lessons on food preparation, money for specific food needs, etc. The imagined portal would match altruistic citizens with schools that need help the most, as well as those that have the capacity to integrate the donations into existing programs.

If the portal serves as a virtual meeting place for San Franciscans and public-school students, then the proposed "community kitchen" will be the physical equivalent. It promises to be a dynamic off-campus space where food entrepreneurs can incubate new businesses (like La Cocina, a San Francisco nonprofit that helps mostly women from communities of color and immigrant communities start small businesses); local foodies can influence school menu planning and meal development; and kids can learn about and begin to train for careers in the culinary arts.


All of this - and eight other visionary ideas - are theoretical for the moment, but the design process included a three-stage rollout plan with rigorous financial projections. The full proposal was presented to the Board of Education in September to an overwhelmingly positive response. The Sara and Evan Williams Foundation, which funded the design phase, has committed to providing ongoing support as the school district begins to bring these design ideas to life.

When asked if he had any reservations about taking on such an ambitious agenda, San Francisco schools Superintendent Richard Carranza reinforced his commitment in no uncertain terms: "If you're in a leadership role in a large urban school system, you can't be timid about embracing a vision for a better life for kids. You have to be ready to be fired for the right things. While I'm not interested in being fired, I don't think anyone can disagree with the vision. It's absolutely attainable."

In their own words

"Some of the meals, I actually like to eat them, but it's just how they package it."
Bridget, 10, Grattan Elementary School

"I usually eat outside because my friends are out there."
Adam, 11, James Lick Middle School

"I try to learn about other cultures through food."
Joyce, 17, Thurgood Marshall Academic High School

More quotes from students and teachers

"I eat school food because it gives me a chance to be more with other people."
Student

"I wish the food was delivered with care, love and a smile."
Student

"I wish the cafeteria was a place to connect and relax rather than a chaotic eat-and-dash zone."
Teacher

Kids come up with 6 ways to make the cafeteria cool

So how does a school district turn school lunch into something kids actually want to stick around for?

Well, truth be told, kids do request ice cream when you ask them what they really want, but scratch beneath the surface and you find that their connection to food is more complicated than "more, sweeter, faster."

After extensive interviews, Ideo found that kids care about each other (duh), about feeling heard and respected by adults, and about the capacity for pleasure and learning in food. In other words, it turns out that kids are not so different from adults in terms of what they desire out of a dining experience.

Here are just a few of the ideas aimed at making school food a hipper proposition for San Francisco's public-school students:

-- Today's cafeterias are industrialized and generic spaces. Instead, create spaces that are inviting and personalized by students and local artists.

-- Create a website and corresponding app that lets kids preorder meals first thing in the morning and rate them after lunch. (Bonus: cuts down on food waste.)

-- Renovate kitchens so kids have places to host cooking clubs and get culinary skills that might help them make a little cash outside of school.

-- Reward kids for their campus loyalty. The more food they buy, the more points they earn for school "merch."

-- Encourage students to submit recipes online that the rest of the school community then votes on. Winning recipes get made and sold on site, fostering the dreams of budding chefs.
Media coverage