So You Want Your Kid to Speak Mandarin? 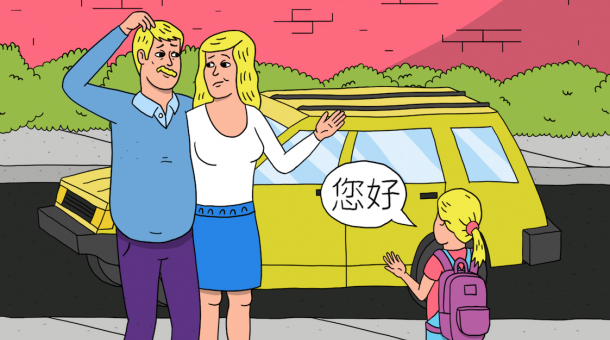 More and more parents are choosing Chinese immersion schools. Most love them - but some are getting more than they bargained for.

Elizabeth Goumas’s top criterion in choosing an elementary school for her kindergarten-bound son, back in 2009, was that it be within walking distance of her house. “If there were an earthquake, I wanted to know that I could get there,” she says, half joking. School leadership, diversity, and a supportive community were all close seconds. What wasn’t a priority, whatsoever, was a language immersion program. “My husband and I had totally ruled out immersion,” says Goumas, a blond, blue-eyed former software sales executive. “We thought it was too complex, too much to take on.” Chinese immersion wasn’t even on her radar.

As it often goes, though, with the San Francisco public school lottery, the Goumas family didn’t get anything on their wish list. Instead, they were assigned to De Avila, a closed school in the Haight that was due to reopen as a Chinese immersion K–5 elementary. “It was also across from a head shop and kitty-corner to the free clinic,” says Goumas, laughing. “We were like, oh no.”

But then they joined a summer playdate with other newly accepted families and saw their son hit it off with two bilingual Chinese kids. “Our biggest worry had been, how is Nicolas going to find his best friends? Will he be able to find them in those four or five kids who speak English?” Social concerns allayed, they decided to “take a leap of faith.” They also decided not to mention the Chinese thing to their son. “The first day of kindergarten,” says Goumas, “he came home and said, ‘Mom! My teacher didn’t speak any English!’”

Six years later, Goumas’s son (now in fifth grade) and daughter (in third, and about as tall as her Chinese teachers) are fully proficient in Cantonese; De Avila is one of the most sought-after public elementary schools in the city; and Goumas is throwing Chinese banquets out of her lower Pacific Heights home—despite the fact that she herself can’t understand a lick of the language. “Sending my kids to De Avila has been a transformational experience,” she says. She marvels as her nine-year-old chats up Cantonese speakers all over town, from the fiftysomething women fondling fabric at Britex to the waiters at Chinese restaurants. She says, “We feel connected to our community in a way we never would have.”

In 1981, the first Mandarin immersion school in the country—the private Chinese American International School (CAIS)— opened on Oak Street in San Francisco. West Portal Elementary followed three years later, becoming the nation’s first public elementary school to offer a Chinese immersion program. Since then, as China’s role in the world economy has grown, so has the number of non-Chinese parents (and second-, third-, fourth-, and fifth-generation Chinese-American parents) who want their kids to learn the language spoken by 1.2 billion people.

This fall, San Francisco will have a total of 14 Chinese immersion programs. Eleven are public, most at the elementary and middle school levels. Half are Cantonese, half Mandarin—and all are in high demand. Some operate as a separate language program within an otherwise conventional school; others, like De Avila and Presidio Knolls, a private K–8 Mandarin school launched in 2012, are full immersion. All in all, roughly 2,700 students are enrolled in Chinese immersion programs in the city.

A majority of their students, not surprisingly, are Chinese-American or have one Chinese parent. While these schools are international and multicultural in obvious ways, they are not exactly bastions of diversity. At De Avila, 63 percent of students identify as Asian, 18 percent as white, 4 percent as Hispanic, and 1 percent as African-American. The demographic breakdown is similar at CAIS, where 38 percent of students are Asian-American and 41 percent multiethnic, 19 percent Caucasian, 1 percent black, and 1 percent Hispanic. The student body at a public K–8 immersion school, Alice Fong Yu, is 66 percent Asian and just 5 percent white. (Because they speak the language, some Caucasian students actually self-identify as Chinese.)

What is ‘Asian’ anymore, anyway?” asks Beth Weise, a former parent at Starr King Elementary and the author of A Parent’s Guide to Mandarin Immersion, published in 2014. “My daughters’ dad is Asian, so they are half Chinese, but they are being raised by two white lesbian moms.” Jeff Bissell, head of school at CAIS, agrees, pointing to the number of mixed-race couples in the area. “San Francisco is a wonderful mishmash,” he says. “The term ‘Caucasian’ is becoming less and less relevant.”

Semantics aside, interest in Chinese immersion education is on the rise, say administrators like Bissell and De Avila principal Rosina Tong. Parents are drawn to it because they want to stimulate their kids’ brains (being multilingual has cognitive benefits, studies show) and prepare them for the working world. Not surprisingly, a big draw is the traditional Asian emphasis on academics. Chinese immersion schools are invariably high-performing, which makes them attractive. “Take a closed or under-enrolled school and make it Mandarin, and test scores go up, enrollment goes up. You get a socioeconomic mix, and you attract parents who might otherwise go private. Waitlists form,” explains Weise. “It’s a win-win for everyone, the district and the families.” She adds, “I’ve never heard of a Chinese immersion school where it isn’t considered cool to be smart.”

It’s also become cool to be global. Linda Vann-Adibe, admissions director and parent at CAIS, says that what’s attracting parents today is the hope of creating global citizens in an increasingly globalized world—and the desire to give their children a competitive edge. Those goals, she says, were less evident 13 years ago, when she was a kindergarten parent—or even 6 years ago, when she started working in the admissions office. “Parents are more sophisticated now. They used to think: I’m not Chinese; why would I learn Chinese? The new parent thinks: It doesn’t matter whether I speak Chinese. This is the future.”

Patti Huang, a Taiwanese American who is married to a white man, says that she chose Starr King to prepare her kindergarten-age daughter for the competition that she will eventually face from the billion-plus Mandarin speakers around the world. Huang also wanted to spark in her daughter a general love of languages. “The heritage thing is a perk,” she says. “And there’s an element of wanting to make grandparents proud.” The desire to connect with their cultural heritage continues to be a major factor for many multiethnic and Chinese-American parents. “I have always wanted immersion,” says Kim Wong, who is also married to a white man. Their six-year-old son attends a traditional public school and takes Saturday Mandarin classes because he didn’t get into an immersion program. “I regret not knowing how to speak Chinese,” Wong says, “and there’s a loss of heritage. I want my son to at least be able to talk to my grandma if I can’t!”

For Weise, it’s also about creating opportunity. “I’m not telling my girls, ‘I want you to become biotech moguls in Singapore or software engineers in Shanghai,’” she says. “I’m just giving them tools. Maybe they’ll decide to become potters or open a restaurant. Learning Mandarin is about options.”

It’s also about rote memorization—and ridiculously difficult. To be considered literate, one must learn about 3,000 Chinese characters. And when it comes to learning those characters, the younger the better. Prime time is kindergarten and first grade, when children’s brains are like sponges and everything is new—washing hands, tying laces. Why not tack on Cantonese, too?

And these assimilated days, no one has a leg up. Most kids in the immersion programs, whether Chinese-American, multiethnic, or Caucasian, are starting from scratch. Some may have attended Mandarin preschool, but about 90 percent of families who choose Chinese immersion education, Weise estimates, don’t speak the language at home. Families who do tend to be more concerned that their children master English, so they choose all-English programs. And newer immigrants may not even be aware that immersion programs exist.

Income levels skew somewhat higher at Chinese immersion schools, Weise adds. In 2012, for instance, the number of Chinese-immersion students who qualified for reduced-fee or free lunch was around 34 percent, versus the district-wide 61 percent—at De Avila, it was only 17 percent. But that’s by no means universal, says Weise. And for parents who view private school as the pinnacle, getting into a Chinese immersion program is a “golden ticket”—they get an academically strong school without having to pony up $25,000 in tuition.

That’s not to say that everyone’s a happy customer. Some white parents just want a more multicultural experience for their kids—and then are shocked by what being a minority in middle school can actually mean. Back in 2003, long before Mandarin was trending, therapist Samantha Smithstein and her husband purposely sought out immersion—any immersion. “Spanish, French, Korean, Chinese...we really didn’t care which one.” They ended up at Alice Fong Yu (AFY). The first few years were wonderful, says Smithstein. “The kindergarten and first-grade teachers were warm and good at gestural communication—my kids loved it. They just soaked up the language.”

But the honeymoon didn’t last. By middle school, Smithstein’s twin daughters were miserable. “Many of the teachers were harsh. Some would publicly humiliate students, make them cry,” says Smithstein. “It was scary for my kids.” Her twins have since graduated, and her son, now in the seventh grade, is doing better than her daughters did. Still, she struggles to make sense of the experience. “I don’t know whether it’s the school or the principal or just a cultural difference. I’d heard stories about schools in China that are     intense, and I’d think, is this the price I pay for sending them to a Chinese school?”

Sophie Wallace, a white French woman married to a white American man, has kids in the fifth and eighth grades at AFY. She raves about their experience, academically and socially. “The great plus is that the kids learn early on that they are not a majority, so they can’t be cocky,” she says.

But for Smithstein, AFY’s social structure was a definite minus. Many children have a tough time at that age, but her twins were outcasts. “There was a kind of racism at the school that was not addressed,” she says. “By eighth grade it became clear that the ‘in groups’ were the Chinese and mixed kids, and the ‘out group’ was the non-Chinese. By eighth grade most of the out group had dropped out—maybe only five or six non-Chinese kids were left. My kids told me it was the low point of their lives.”

Still, Smithstein doesn’t regret her choice. “When I step back, I know that it was a really cool experience. I feel good about the academics; they were exposed to a different culture; they are unafraid to plunge into new experiences; they traveled to China. They are two tall Jewish white girls who speak Chinese—so many positive things came out of it.”

One of the biggest positives? “We cannot help with homework,” says Mikhal Bouganim, a founding parent at Presidio Knolls. “And I love, love, love it.”