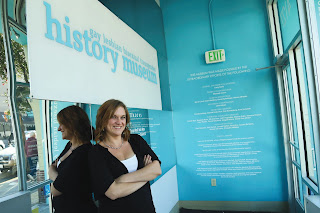 There has perhaps never been a more pertinent time to introduce an LGBT studies class to a San Francisco public high school.

So says Lyndsey Schlax, a government, history and economics teacher at Ruth Asawa San Francisco School of the Arts since 2008. Although Schlax has previously touched on current events in her classes, she’s certain the first-of-its-kind LGBT studies class next fall will identify with students more than ever before.

“The overarching theme of the year is the nondominant narrative of the American experience,” Schlax explained. “[And] I think there is a lot going on in terms of the advancements of rights for the LGBT community.”

On Tuesday, Schlax finalized the curriculum for the groundbreaking course, which had 25 students enrolled as of mid-June. The class is an elective and will last a semester, as well as count toward the San Francisco Unified School District’s rigorous graduation requirements that ensure students are eligible for University of California or California State University.

While the class marks the first on-site LGBT lessons taught in the SFUSD, the district for years has strived to provide more inclusionary courses, particularly following a Board of Education resolution approved in 2010 to expand services for LGBT students. A district-funded course was offered in 2011 at Lyric, a San Francisco-based LGBT organization for youths, but that class was only available on Saturdays.

And the latest effort couldn’t come a moment too soon as the nation faces an LGBT crusade that in some ways mirrors the Civil Rights Movement of the 1950s and 60s, Schlax noted.

The LGBT studies class will be broken into three units, beginning with basic terminology, followed by identities and the history of LGBT leaders including the late Supervisor Harvey Milk and the AIDS pandemic of the 1980s. The third unit will look at the current portrayal of those who identify as LGBT.

Schlax said there will also be a week to focus on transgender issues and the perception of LGBT people worldwide, including the opposition and persecution they face.

The class will include a field trip to San Francisco’s GLBT History Museum, which will allow students to learn from the museum’s 30-year-old archive.

“The archive was formed in 1985 in the height of the AIDS pandemic when no one would take our materials because of prejudice,” said Daryl Carr, acting executive director of the museum.

The museum also offers artwork, pictures, costumes and other artifacts — including a chair that belonged to Milk — that will give students a snapshot of various LGBT stories in The City, Carr said.
“It’s as relevant for kids today to know that how freedom is earned by both struggle and triumph,” he added.