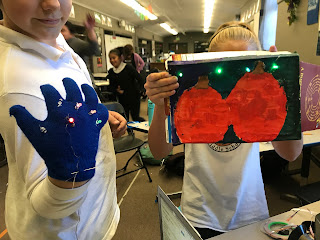 Imagine wearing gloves that not only keep your hands warm but help you see at night, or playing with a small Arduino-controlled car by using a remote.

Computer science students at Everett Middle School showcased their circuit art technology creations at the school’s first-ever Computer Science LED lights event. The purpose of the Cultural/Computer Arts Spanish/Sciences Technology and Literacy education (CASTLe) event was to share what students learned in computer science with an emphasis on creativity.

Mrs. Yesenia Castro-Mitchell, the computer science teacher at Everett and creator of CASTLe, gave opening remarks followed by a video describing the process of creating art using technology in a culturally responsive way. As she spoke, one student walked around the dark theater with an LED wearable glove.

Twelve other students showcased circuit art from light-up wearables to an Arduino - similar to a small computer - controlled car, all made in Mrs. Castro-Mitchell’s classroom. Students and parents walked around the three exhibits as students described and demonstrated their creations.

“I was really excited to go on stage and show off my wearable LED project to everyone,” said Calder J., a student at Everett. “I am really excited to learn how to code more and, so far, the class is really fun!”

The students weren’t the only ones excited about the event. Mrs. Castro-Mitchell believes the exhibition generated enthusiasm, interest and awareness of computer science throughout the entire student body.

“I believe CASTLe creates the opportunity to cultivate innovation. Everyone was fascinated to see how computer science blends with Fashion, Art and robotics,” she said. “It was nice to let parents know what students are doing in this elective [and] what type of projects students are working on.”

Maria, a computer science student, feels that she made the right choice by taking the class. “I think this class is for all students and not just for boys. I personally love using Scratch and making animations. I am usually the first person in and the last person to leave Mrs. Mitchell’s class.”