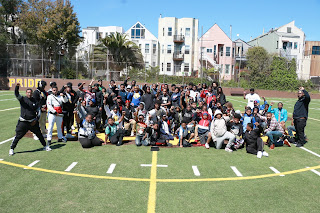 The purpose of the event was to build affinity between black male students from various San Francisco Unified School District (SFUSD) schools and learn from the experiences of successful African American men.

“This day is for you, brothers. For you to walk out of here today believing that you can do anything and be anything you want to be in this world. And I truly mean that,” MDP Program Manager Bobby Pope told students during his opening remarks. 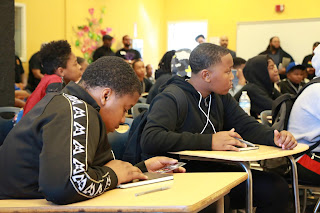 The students attended breakout sessions to learn about the experiences of African American men including Public Enemy 2.0 and former MDP Program Manager Brother Jahi, Anthony Gilmour aka Tone Capone, and manager for rapper Too Short, Lionel Bea and hear what motivates them in their work. After lunch, closing remarks were provided by keynote speaker Damien Posey of The City Eats and United Playaz.

“One of AAALI’s core values is black excellence. Black excellence is knowing who you are and having a vision and purpose for yourself,” said Pope. “The men in this room that I’ve invited out today represent black excellence. The students have to know that if they really want to achieve their goals, they have to see examples of why it’s important to put the time and energy into it, then make the sacrifice to reach success.”