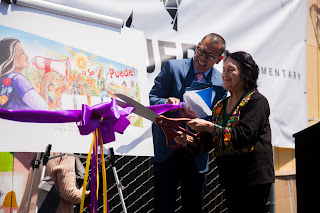 San Francisco public schools strive to be places where every student can see themselves and be themselves, where learning reflects both the familiar and unknown.
Numerous San Francisco Board of Education policies adopted over the years specifically honor and support various efforts in SFUSD to ensure all students are seen and heard in their coursework, and that each student’s heritage is celebrated.
This month we’re joining the nation in celebrating Latinx Heritage Month.

Celebrating Latinx Culture through Music
Music is a particularly important way that students develop neurologically and culturally. The SFUSD Mariachi program started in Spring of 2014 with 14 students at Mission High School. It has since grown to over 300 students across nine schools including five elementary schools, two middle schools and two high schools.  Last year the Mariachi program was featured in a news story on KTVU!
Spanish Speaking Encouraged
SFUSD has continued to build robust language programs over the years. Now we have thousands of students learning in two languages at schools across The City every day.
Students can participate in biliteracy programs from their very first day in school. For native English speakers, Dual Language Pathways offer a chance to learn Spanish (or a few other languages) alongside native Spanish speakers starting in elementary.
SFUSD is committed to ensuring that students who are native Spanish speakers acquire high levels of both English and home language proficiency, skills that will lead to success in the 21st century.
In order to encourage and recognize linguistic proficiency and cultural literacy, SFUSD and the California Department of Education award the Seal of Biliteracy as an endorsement on a student’s diploma to graduating seniors who can demonstrate proficiency in one or more languages in addition to English.
Honoring Latinx Leaders
In 2018, Fairmount Elementary was renamed Dolores Huerta in honor of the civil rights leader. Now SFUSD is proud to have a Cesar Chavez Elementary and a Dolores Huerta Elementary. Dolores Huerta has dedicated her life to fighting for the civil and human rights of those who are oppressed or disenfranchised. Along with Cesar Chavez, Dolores Huerta co-founded the United Farm Workers and helped organize the Delano grape strike in 1965. She is also credited with coining the phrase “Sí, se puede.”
Happy Latinx Heritage Month!