SFUSD Students Learn About Careers in Sports with the SF Giants 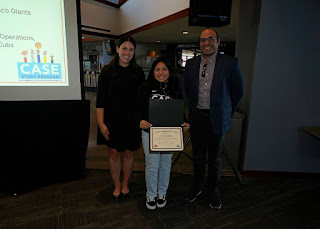 Launched pre-pandemic in Chicago with the Cubs, Cubs Charities, and students from Chicago Public Schools, the program aims to support high school students in building their professional sports knowledge while allowing opportunities for networking and providing relevant instruction from leading executives in the field.

In the pilot year of the program in San Francisco, 28 juniors and seniors from Phillip & Sala Burton High School and Galileo Academy of Science and Technology spent the month of September gaining real-world insight not only from executives with the Giants and Cubs, but from the San Francisco 49ers, Golden State Warriors, and their team charities (49ers Foundation and Warriors Community Foundation) as well.

Students were recruited over the summer and then welcomed to CASE Study through a kickoff event at Oracle Park in late August by former Giants General Manager/current Detroit Tigers President of Baseball Operations Scott Harris and various members of the Giants front office, prior to a unique gameday behind-the-scenes stadium tour, career panel, and ballgame versus the Arizona Diamondbacks. 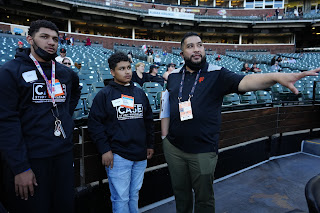 Vince Limtiaco, Human Resources Manager for the SF Giants, with Burton and Galileo seniors (John F-P and Michael R, respectively) behind home plate at Oracle Park during the kickoff event. (Photo Credit: SF Giants)
Throughout the following month, participating students attended classes on Zoom, twice a week, where industry insiders taught them the ins and outs of running professional sports teams and their venues and charities, along with topics such as: Sales, Youth Initiatives, Data Analytics, Ballpark Operations, Scouting & Player Development, Sport for Social Good, and Player Performance & Wellness. During the first meeting, students were excited to meet with and learn from Scott Harris, as well as Giants Manager, Gabe Kapler, and Giants assistant coach, Alyssa Nakken, the first full-time female coach in Major League Baseball history. 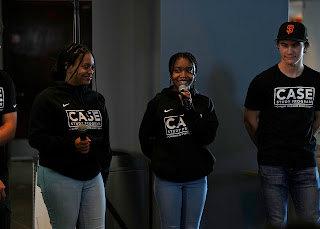 Galileo's Cali Lipscomb, Kamiyah McDowell, and Misha Burton present with their team on Scouting & Player Development. (Photo Credit: SF Giants)
Bryan C., a senior at Burton, found he is interested in a future career in Scouting & Player Development, or Data Analytics. He says he is now “more likely to pursue a career in sports with the advantage I have in networking, as well as the knowledge I now have.”

On September 29, student families and invited guests were treated to an end-of-program celebration on the Oracle Park Club Level, including pre-game presentations delivered by the student participants, where they had the opportunity to highlight and apply what they learned over the course of the month. Afterwards, students received program diplomas, then were able to go onto the baseball field during batting practice before enjoying a meal and a ballgame versus the Colorado Rockies.

Burton senior Jialin Z. says she previously was hesitant about thinking of herself working in sports in the future, “But now that I’ve got an understanding, I believe I may have potential in this field.”

Learn more about CASE Study on the SF Giants website.